Chemistry brings forth the most fundamental science, a subject dealing with intricate and most complex states of matter. All states of matter extend to the natural world including ourselves, making chemistry a science of personal interest. The extent of our knowledge depends on man's relationship and function towards its chaotic criteria.  Relationships in theory, method and practice negotiate how all scientific concerns will be addressed.


Much like particles relying heavily on physics to exist, our natural world selves rely upon human connections to ensure our own existence. Our natural curiosity compels us to understand the world and the people in it.

Back in October 2013, I attended ConfluenceCon for its first year in Oklahoma. Confluence is basically a curation of actual people whose digital content and influence play a contributing role to the online community as well as offline.


Meeting twitter people in the flesh is weird but it was worth meeting Marissa Mohi and David Cameron. Also, it is the first place I learned of OU Janux because Adam Croom presented a talk titled How To Become An Authority On Anything.


This is how I learned about Janux and Croom's vision for digital learning that did not include the traditional student. The ironic thing is I heard about Janux's Chemistry of Beer through twitter and the hashtag #ChemBeerOU a few months later.

It was a chemistry class unlike any other. Mostly because it was on a platform unlike any other. It was built for digital content, but content that can be pieced apart, edited, corrected, analyzed, discussed, shared as well as elaborated and expanded upon. I think the interaction was so intense and diverse among the 9,000 students enrolled--was traditional classmates transformed into commercial brew-masters, home-brewers, undergrad chemists, graduate degree chemists, PhD chemists and any intermediate learner with regard to beer artistry. Let me show you. 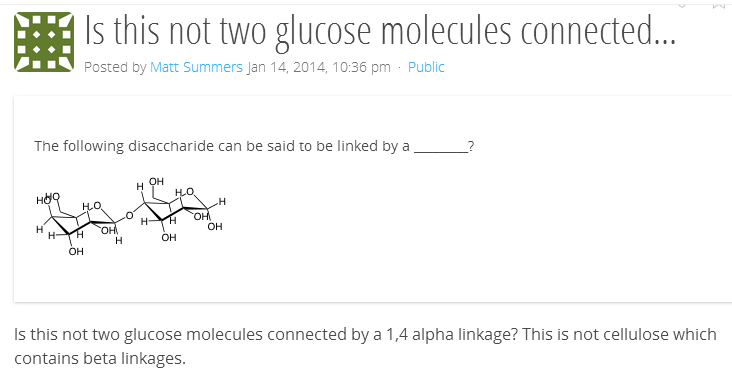 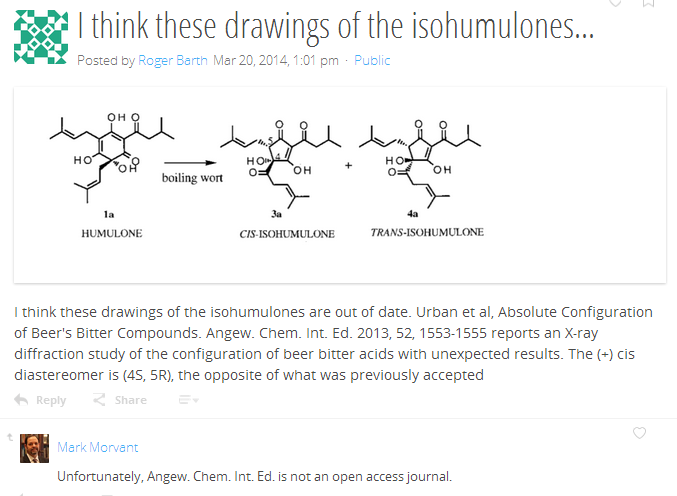 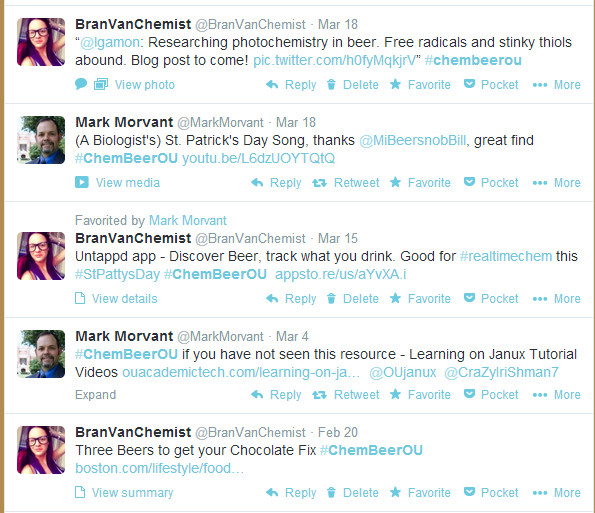 I look forward to engaging online through chemistry content in the future. Hopefully science communication can be shared through online learning platforms. Honestly, if you give me any reliable hashtag, I will tweet it. My twitter habit along with endless content is what accidentally landed me in the OUdaily.

A FACE OF "TERRIBLE PATIENCE" 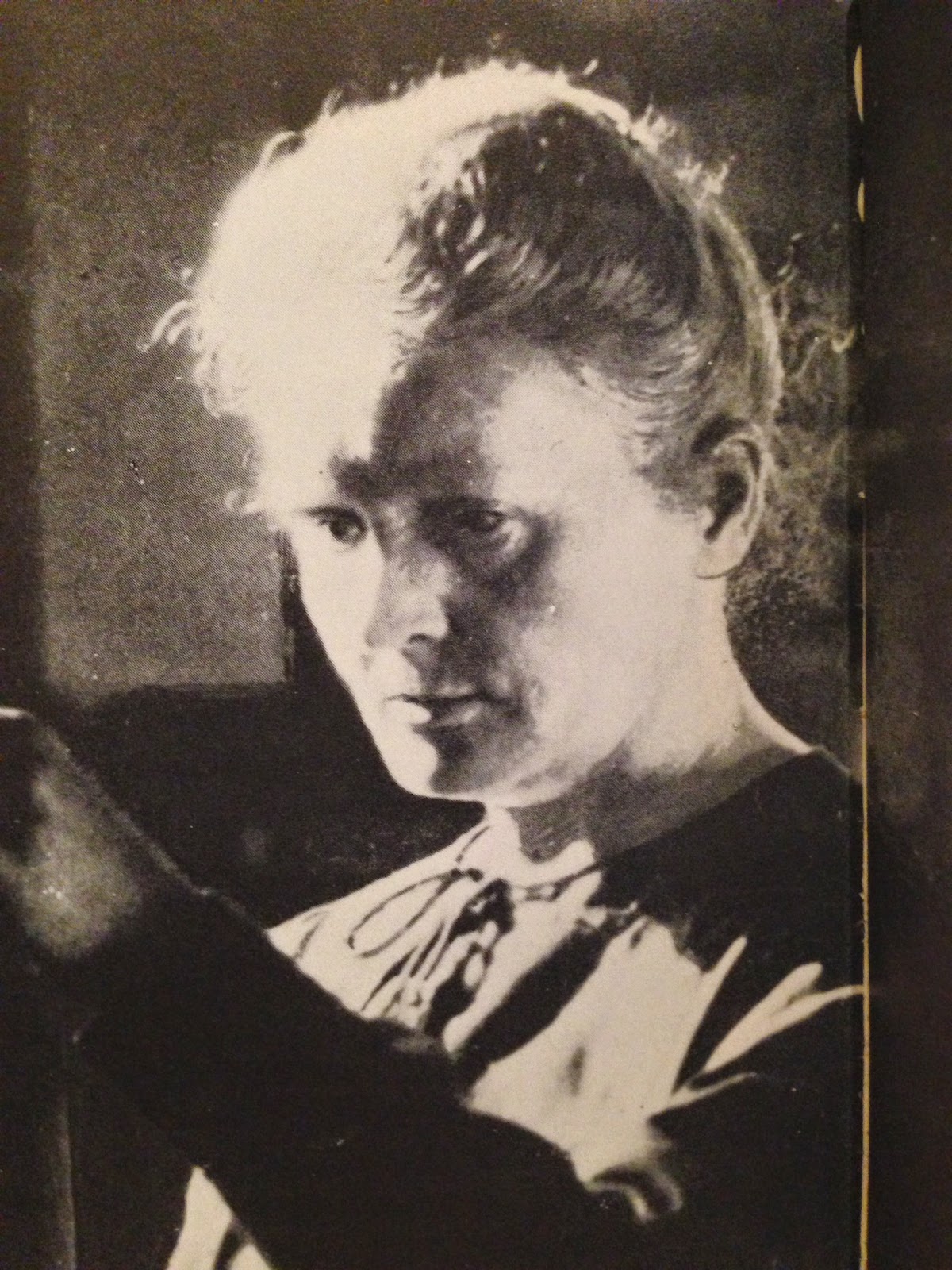 Marie Curie's documented appearance throughout history is easily recognizable among those in the Age of Scientists. Her face reflects what her daughter Eve called the "terrible patience" -- she displayed during her tedious radium experiments.

Eve, the one non-scientist in the family wrote the celebrated biography of her mother, and in it described her manifold talents as "a physicist, a chemist, a specialized worker, an engineer and a laboring man all at once."


RADIOACTIVITY AND THE FAMILY THAT TRACKED IT DOWN

Marie was given free use of a store-room, sweating with damp, on the ground floor of the School of Physics. It is where unused equipment and lumber were put away. Deprived of an adequate electrical installation and of everything that forms material for the beginning of scientific research, she kept her patience, sought and found means of making her apparatus work in this hole.

Fascinated by radioactivity, her method remained intense and the same, even as her curiosity shifted among the most diverse forms of matter.

"You know, Bronya, the radiation that I couldn't explain comes from a new chemical element. The element is there and I've got to find it. We are sure! The physicists we have spoken to believe we have made an error in experiment and advise us to be careful. But I am convinced I am not mistaken."

May/June 1898-- a valuable force doubled and an 8 year collaboration ensued up until it was destroyed by a fatal accident. They signed all of their notebooks and scientific publications "We found" and "We observed" -implying equal credit be due. 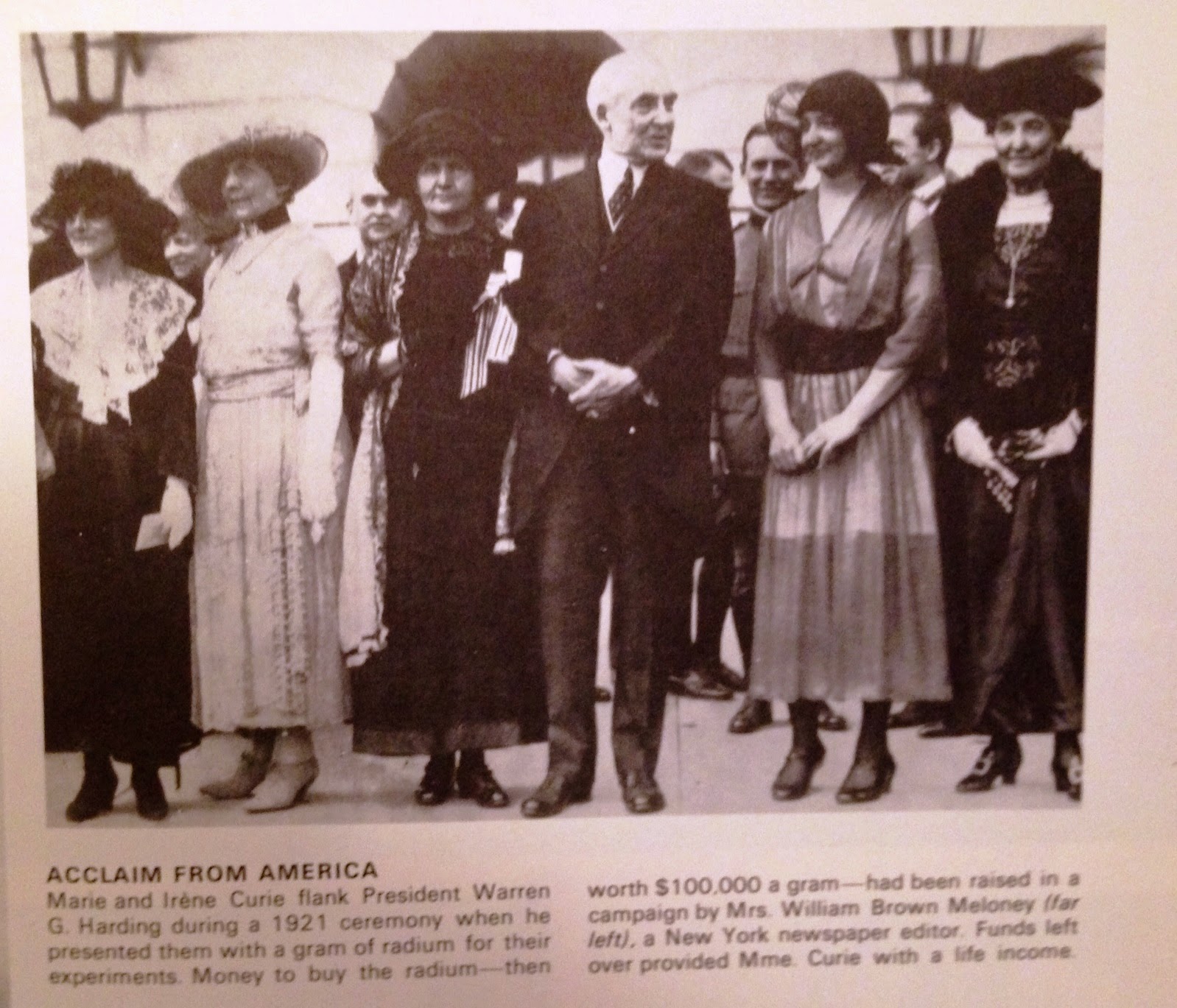 Marie and Irene Curie flank President Warren G. Harding during a 1921 ceremony where he presented them with a gram of radium for their experiments.Money to buy the radium-- then worth $100 a gram-- had been raised in a campaign by Mrs William Brown Meloney, a NY newspaper editor. Funds left over provided Mme. Curie with a life income. 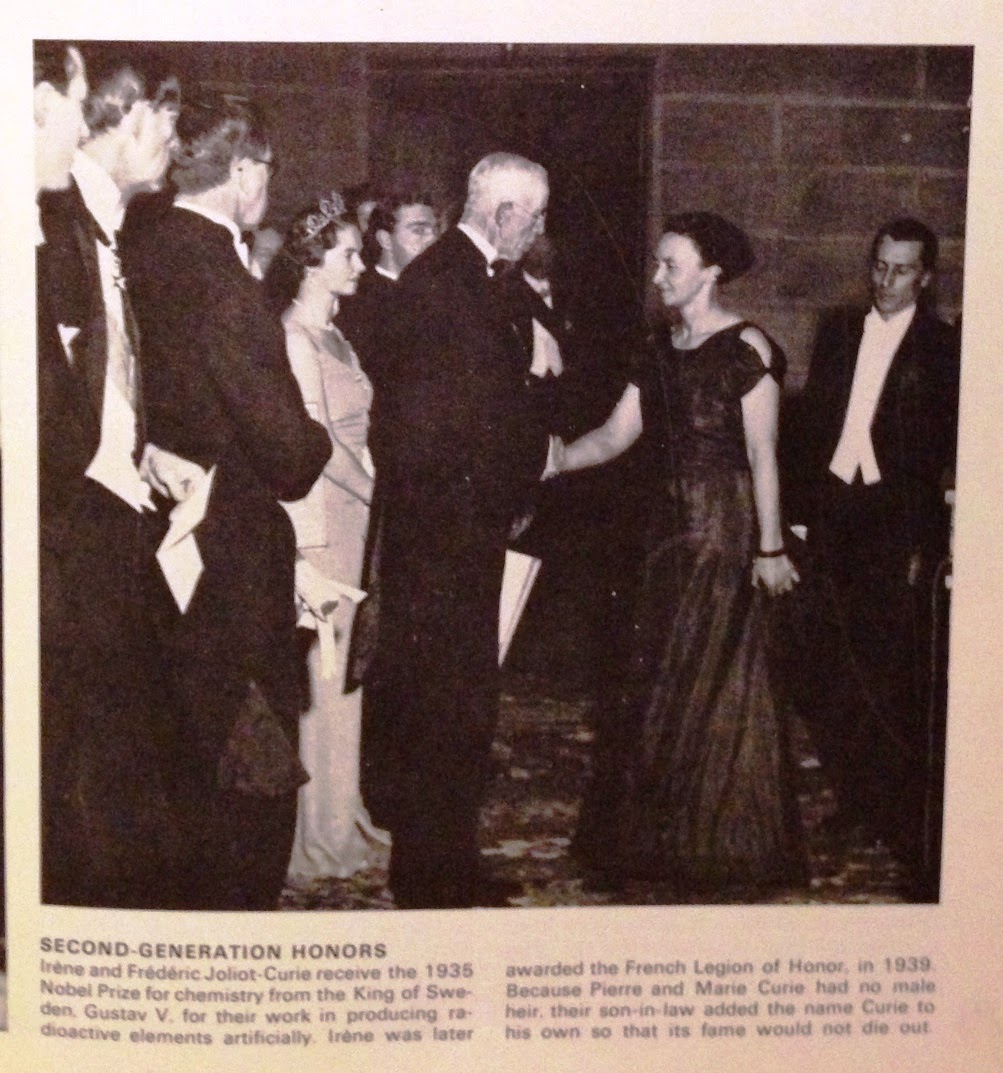 Irene and Frederic Joliot-Curie receive the 1935 Noble Prize for chemistry from the king of sweden, Gustav V, for their work in producing radioactive elements. Irene was later awarded the French Legion of Honor, in 1939. Because Pierre and Marie Curie had no male heir, their son-in-law added the name Curie to his own so that its fame would not die out.